New Swiss Hospital to be planned by MMI and Nickl Architects 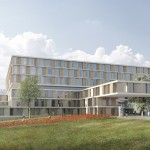 The judging panel selected the project design called “Agnes” as the winner among six participants. The hospital is the flagship hospital in the eastern part of the canton of Aargau, one of the federal states of Switzerland, which was built in 1978. After 35 years of intensive operation the hospital needs to be reconstructed now since it faces operational, structural, and technical deficiencies.

Essential to the winning planning concept is a new hospital building, which is located in the immediate vicinity of the existing building. In the project design, the important functions and tasks are concentrated more efficiently than they are at present. The medical concept on this study was provided by MMI Schweiz AG.

The cost for the new Baden Canton Hospital will be about 450 million CHF. The construction will start in mid-2018. It is expected that the new 400 bed hospital will be completed in 2022. Once it is operational, the existing main building will be demolished.